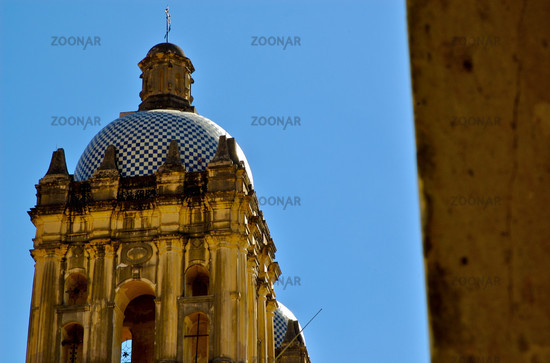 The Church and former monastery of Santo Domingo de Guzmán is the most important of the numerous baroque ecclesiastical buildings in Oaxaca, Oaxaca, Mexico. The complex of buildings includes a substantial sanctuary and an extensive system of courtyards, cloisters and rooms that formerly constituted the monastery but now house the Cultural Centre of Oaxaca. This museum includes an important collection of pre-Columban artefacts, among them the contents of Tomb 7 from the nearby Zapotec site of Monte Albán. The former monastery garden is now an Ethnobotanical Garden, containing a large collection of plants native to the region. Interior, Church of Santo Domingo The entrance to both church and museum is across a wide plaza that acts as a centre for local fiestas and other entertainments. It is located about half a kilometre north of the central squares of the city, the Zócalo and the Alameda, and the connecting street is pedestrianised, so it is a popular place for both tourists and local residents to stroll. As its name implies, the church and monastery were founded by the Dominican Order. Begun in 1572, they were constructed over a period of 200 years, between the sixteenth and eighteenth centuries. The monastery was active from 1608 to 1857. In the period of the revolutionary wars, the buildings were turned over to military use, and from 1866 to 1902 they served as a barracks. The church was restored to religious use in 1938, but the monastery was made available to the Universidad Autónoma Benito Juárez de Oaxaca. In 1972 it became a regional museum, and in 1993 the decision was taken to undertake a full restoration. This was completed in 1999. It is an exceptional example of conservation architecture. The architect responsible was Juan Urquiaga. The church has also been fully restored. Its highly decorated interior includes copious use of gold leaf.